How to Set Up Face ID With a Mask

By Lynn Joseph
April 2, 2022
InternetHow to Set Up Face ID With a Mask 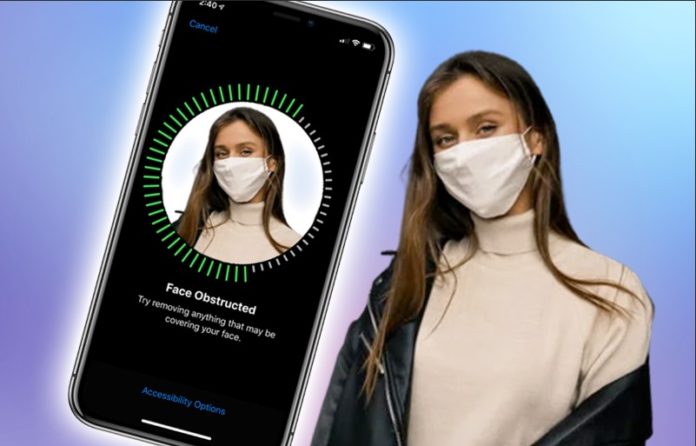 How to cut video clips from video Online and Offline

How to record Zoom meetings without Permission?

It has been a while but finally Apple has added a feature where you can actually unlock your phone without having to wear a mask. Well, in case if you are reading this in the future and wondering why would anyone want to unlock their phone while wearing a mask, you might want to actually google all about COVID 19.

There has been some debate as to whether it is really effective but then that’s not the point of this article. Assuming you have an iPhone with Face ID feature, this feature might come in handy

Table of Contents show
Why unlock when wearing a mask?
What is Face Id?
How Face ID works
Unlock while wearing mask : How to Set Up
Steps to do the usual Face ID setup

Why unlock when wearing a mask?

Eventhough Face ID is extremely effective, it has been a hurdle to unlock your phone in public because of the need to wear a mask. So, I have been around people who drop their mask for a second just to unlock thier phones (Its quick a view).

Like I said earlier in the introduction, Apple was a little late to bring up this feature to the world which by the way was on beta for a long time before it reached the public.

This feature is allowed us in the following devices.

Alongside these devices you need iOS 15.4 like I said earlier.

What is Face Id?

Apple has been very focused on protecting your data on all your devices for a long time. A major part of privacy is to lock and authenticate them. From Touch ID to Passcode to other forms of authentication, Apple took a big leap into the Face ID scene by bringing it first alongside iPhone X a couple of years ago.

Eventhough it was a little slow in the beginning, Apple has continued to improved the unlock efficiency and has made significance progress to a point where now you don’t even feel like its slow anymore. I have been using it for the past three years and it has been nothing but a pleasure.

Face ID works by adding thousands of imaginary invisible dots to create a depth map of your face. In addition to that, an infrared image is also captured for referencial purposes. The neural engine in the phone of A11, A12 Bionic, A12X Bionic, A13 Bionic, A14 Bionic and A15 Bionic chip converts the depth captured earlier and infrared image to create a mathematical representation and then that data is compared with the scanned image when you set up Face ID.

The TrueDepth camera has machine learning to give your extreme amount of data right when you scan the data. In case of wrong scan, you can enter a 4 or 6 digit passcode to actually unlock the device.

See Also: How to Hide Photos on iPhone (iOS 15)

In case if the Face ID is used by twins who are identical, this probability of 1 in million might be lower because their facial structures might not have fully developed. In that case, you can use the Passcode to authenticate and not worry about the possibility of misuse of devices.

The depth information of the face scan is why you can’t use a photo to unlock the iPhone. Its designed to protect your device against any type of fraud activity to unlock the phone. The only requirement is to keep your eyes open.

Unlock while wearing mask : How to Set Up

This feature is available for iPhone 12 or later. You need to get iOS 15.4 for this to work effectively. So, if you are wearing a face mask or any other form of face coverying, this update will let you unlock your device by using characteristics around your eyes.

In the next section, we will see how you can set up the Face scanning for authentication.

Steps to do the usual Face ID setup

You can continue these steps from the last step of the previous section. You might have to do this setup even if you have set up the Face ID in the phone already.

So, that’s how you can actually use Face ID to unlock even while wearing a mask. I have been using this feature now and I have to say it works pretty effectively. The only problem is lets say the mask you are wearing is a little above and closes a big portion of your nose, then the unlock might not work because of that reason.

I’m assuming its because of the less information done while scanning the face with a mask. But its no big deal, i hardly notice it anymore but you can take it from me when I say it works very well.

This might seem like a feature that is done entirely for the purpose of COVID 19 but its a responsible thing to do from the side of Apple to be able to put resources into this feature that helps a lot of people to be a little safer while wearing a mask.