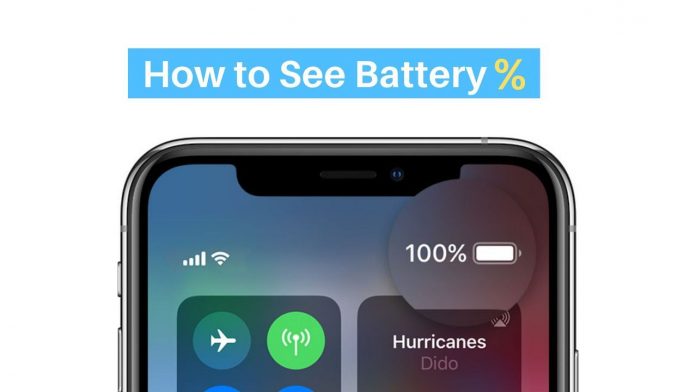 How to Use Filters on SnapChat?

How to unfollow everyone on twitter at the same time!

In this post, you’ll find ways to show the battery percentage on iPhone 13, 12, and lower models. With increasing specs in new Apple iPhone models, the designs have been changing a lot from the conventional ones. The top-notch display has its features, but it has also removed the spaces that were previously occupied by the status bar. And hence the battery percentage is not shown on the new iPhone models. But how can we get it back? This is a general question for many of the new iPhone users.

In this blog, we’ll discuss easy ways on how to show battery percentage on iPhone 13, 12, 11, X, and other models. New model iPhone users are having a hard time determining their battery percentage because the status bar is hidden in the new iPhone models, which are coming with a top-notch display.

In conventional iPhone models, where the status bar is visible, it also showed some additional information, including the service provider name and battery percentage indicator. But with the advent of X-series top-notch display models, the status bar has been cut short, and hence many features, including the battery percentage indicator, are also gone.

(Do note that this is different from the way the Control Centre displays on other iPhones, which blur out the top status bar.)

Alternative methods on See battery percentage on iPhone 13, 12 and 11:

Other than the above-listed method, you can alternatively use these tips.

Other posts on the iPhone:
1. How To Screenshot On iPhone X, XS, XR
2. How to Delete Contacts on iPhone?
3. Steps To Block A Phone Number On iPhone
4. How to Clear Cache on iPhone
5. How to Rotate a Video on iPhone
6. Connect iPhone To Tv (Wireless, USB, HDMI)
7. How to Change AirDrop Name on iPhone, iPad, or Mac?

How to show battery percentage on iPhone 7 and 8 series

If you own one of the iPhone 7, 8 Plus, or any non-X series iPhone models, then their displaying of battery percentage is a bit different from the top-notch display variants.

Try to use a battery widget instead. It is a secure method and can be put on the lock screen to view the remaining battery capacity. Follow these steps to add a battery widget to your device:

Hence, this adds a battery widget to your iPhone device. The next time you swipe right from the home screen of your device, you’ll find the battery widget indicator showcasing the remaining battery of your device. Follow these to know how to show battery percentage on the iPhone.

If you do not see the battery widget, follow one of these instructions.

In new iPhone models, follow the steps mentioned above to get a hold of the battery percentage indicator. It will help you to get an idea of how much charge is left and also plan your day accordingly, as per your convenience.